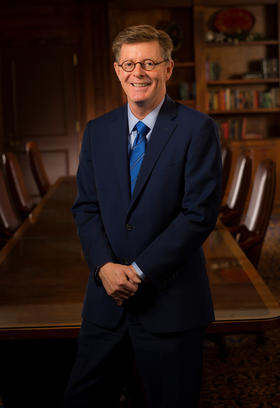 University of Pennsylvania Provost Vincent Price will take over as Duke University’s new president on July 1, 2017. Duke’s Board of Trustees made the selection Friday morning.

Price told the Duke community on Friday afternoon that the institution is ready to face a watershed moment for research universities.

"Duke is perfectly poised," he said, "to seize unparalleled new opportunities and possibilities to thoughtfully deploy technology in redefining our work."

Under his presidency, Price said that Duke will become a model for diversity and inclusion in higher education.

"Every member of our community belongs," he said. "If we share our differences vigorously and respectfully, we are all the more stronger, intellectually and socially."

Duke's current President Richard Brodhead announced in April that he would step down after 13 years at the helm. The search for his successor included 100 nominees and 25 potential candidates, according to trustee Jack O. Bovender, who led a search committee of 19 trustees, faculty, students, administrators, and alumni.

In a statement, he called Price “a transformative scholar, a dedicated educator and an experienced executive at a very complex institution not unlike Duke.

“I could not be more excited to have him as our tenth president,” Brodhead said.

In addition to serving as provost of the University of Pennsylvania since 2009, Price is a professor of communication and political science at the Philadelphia school. He is an expert on public opinion, social influence and political communication, and his 1992 book, Public Opinion, is taught around the world.

According to a press release from Duke, Price developed efforts to diversify the University of Pennsylvania’s faculty and facilitate interdisciplinary research and teaching. He led the school’s partnership with Coursera, an online learning platform, and served as founding chair of the platform’s University Advisory Board.

With the introduction of Price to the Duke Community Friday afternoon came the news of a former president's passing. Keith Brodie, Duke's seventh president, died Friday morning at the age of 77.  His term lasted from 1985 to 1993 and, according to Brodhead, brought the beginning of Duke's rise to national recognition.