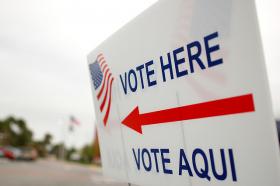 With Republicans trying to maintain control of the United States House, three races in North Carolina have emerged as battleground districts. And one of those covers part of the Triangle, where voters are choosing between Republican incumbent George Holding and Democratic challenger Linda Coleman.

The two major party candidates met for their only scheduled debate in Raleigh earlier this week.

This race wasn’t supposed to be close.

Two years ago,  Holding won North Carolina’s second congressional district by 13 and a half percentage points. But in this potential wave election, Holding has been looking up in some polls, and Coleman has received outside support in the seven figures. On Monday the two met in person.

Midterms such as this one are historically a referendum on the first two years of a presidency. Holding, a Republican like Donald Trump, tried early on to navigate the bombastic commander-in-chief.

“I don’t agree with everything the president does,” Holding said. “I don’t agree with the style on a number of things… I wish some of these early morning tweets wouldn’t happen, but when it comes to the issues we’ve actually gotten across the finish line, I do agree with what we’ve been able to do.”

Moments later Moderator Tim Boyum, had this exchange with Coleman..

“Is there an issue that you can think about where you agree with President Trump?” Boyum asked.

“Ask me later,” Coleman said with a laugh after a long pause.

The hour-long debate, including those six and a half seconds of silence, aired live on Spectrum news. There were no contentious moments or heated exchanges.

Holding wore a dark suit, black-framed glasses, and held a red pen in his right hand. Coleman was in a blue dress with her fingers interlocked on the table in front of her for much of the night.

Holding is a 50-year-old former U.S. Attorney seeking his fourth term in Congress. Coleman was a Wake County Commissioner and State House member. This district includes eastern Wake as well as parts of Franklin, Nash and Harnett Counties. Coleman says Holding doesn’t spend enough time at home, and that voters frustrated over that have told her they want a change.

Among the other topics in the forum: healthcare, climate change, recent Congressional tax reforms, who should be the next Speaker of the House (a question both candidates ducked), and at one point Holding even pivoted to juvenile diabetes in response to a question about constituent services.

The economy emerged several times. And Coleman offered this criticism:

“Mr. Holding went to Congress saying that he wanted to reduce the national debt, but since he’s been there what he’s done is add to the national debt. So you can’t have it both ways,” Coleman said.

Holding responded: “Look at the farm bill; 80 percent of the Farm Bill is food stamps. I believe in workfare, not welfare. So for food stamp recipients – if you’re able bodied, have the ability to work, and are not taking care of kids, do not have a disability, I think you need to work for your food stamps, work for you benefits.”

This race is seen as a bellwether as Democrats try to pick up 23 seats, and power, of one chamber of Congress. It’s a largely suburban district race between a white man and a black woman. Holding has raised about four times as much individual contributions as Coleman. However, campaign spending from outside groups – much of it outside of the state – has pumped in about two million dollars – so far, and has likely played a role in keeping this race close. Jonathan Kappler is executive of the non-partisan North Carolina Free Enterprise Foundation.

“I think the second congressional district is emblematic of this election cycle, potentially if Linda Coleman is successful, by being representative of how a wave election can manifest itself and take  out an incumbent that we weren’t anticipating being in trouble at the beginning of an election,” Kappler said.

With early voting in full swing, we’re in the home stretch. Following the debate last night Holding and Colman each was asked what will ultimately decide this race.

They both said voter turnout.

A North Carolina congressional candidate said the website she used when she campaigned for another office is now owned by a Russian.