HB2 In Rearview, Credit Suisse Will Bring 1,200 Jobs To RTP 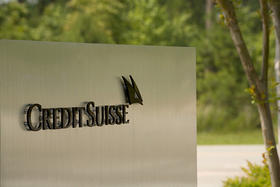 In a deal worked with Gov. Roy Cooper's administration, the company will be eligible for up to $40 million in tax credits through the state’s Job Development Investment Grant (JDIG) program. Under the program companies receive tax credits only if certain performance and investment benchmarks are met.

Salaries will vary by position, but taken together, the average salary for these new positions will be more than $83,000, according to Credit Suisse, well above Wake County’s average of less than $54,000.

At a press conference to celebrate the jobs announcement. Credit Suisse USA president and CEO Eric Varvel criticized House Bill 2, the controversial bathroom bill that was repealed earlier this year. "We opposed HB2, which was at odds with these core values," Varvel said. "While it was on the books, we chose to halt our expansion plans in the state and consider other options."

In Depth: A State Divided: HB2 And Transgender Rights

Varvel went on to say that even the repeal wasn’t ideal. "We realize the recent repeal of HB2 contains some compromises, and while not perfect, it is an important first step that re-establishes the minimum conditions for us to expand our presence in the state," he said.

The new jobs will include in finance, IT and other critical corporate functions.

One of the nation's largest gay rights groups plans to turn down $325,000 from Bank of America this year. That's because of the bank's role in brokering a compromise, which the group opposes, to repeal HB2.

RALEIGH, N.C. (AP) — The NCAA has awarded men's basketball tournament games in 2020 and 2021 along with several other championship events to North Carolina after the state repealed elements of a law that limited protections for LGBT people and put it at risk of being passed over as a host for future events.

One week ago, House Bill 2 was repealed and replaced by House Bill 142. And a lot has happened since then.

The NCAA and ACC have each said championship games can again be played in North Carolina. But in the case of the NCAA, its decision was a "reluctant one."

That’s because the compromise law that ended HB 2 also essentially blocks LGBT discrimination protections in North Carolina until [at least] December of 2020.

Charlotte  transgender activist Lara Americo is among the disappointed. She thinks House Bill 2 was borne of ignorance among lawmakers. Not so with the HB 142 compromise.

“There’s been a lot of education about what the transgender community in North Carolina looks like," Americo says. "Now with HB 142 being passed, they know who we are and what we’re about, but they still refuse to give us the protections that we need.”

Americo spoke to WFAE’s Mark Rumsey about the new law, and what life has been like since the passage of House Bill 2.