House Bill 2 apparently did not dampen tourism in 2016.

North Carolina recorded a record $22.9 billion in visitor spending last year, according to figures recently put out by the Department of Commerce.

The figures are from research commissioned by Visit North Carolina, a unit of the Economic Development Partnership of North Carolina (EDPNC), and conducted by the U.S. Travel Association.

Governments benefitted as well as tourism spending brought $1.2 billion in tax receipts, according to the study.

Other points from the study include: 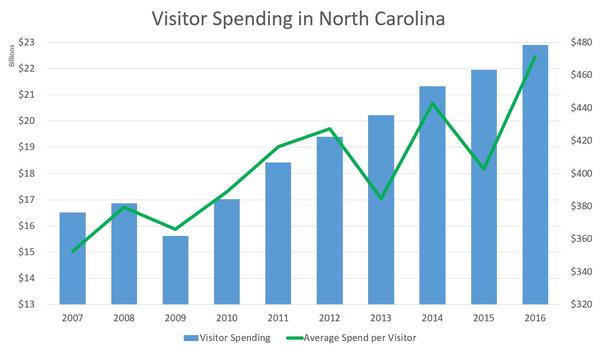 The hotel boom in Asheville thanks to ever rising number of tourists visiting the city has been well documented  (though maybe the boom is coming to an end or at the very least slowing down).  But another surge in hotel construction has been happening right to the south of Asheville.

Mountain views, hiking trails an exploding food scene and more breweries per capita than anywhere else in U.S.   It’s easy to see why the Asheville area is spilling over with tourists and newcomers.   The boom is a boost for the economy but often makes for a busier and sometimes more challenging day for police and other first responders whose job it is to care for both tourists and the people who live  here.  WCQS’s Helen Chickering reports.