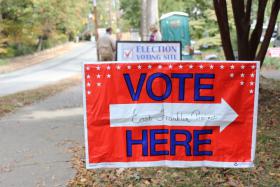 The Green Party has become North Carolina's fourth official political party thanks to a new law offering more options to qualify, giving more candidate choices to some voters this fall.

The state elections board unanimously accepted the application of the Green Party of North Carolina on Tuesday. Its candidates can now automatically be put on state ballots through at least 2020.

"You don't really have any credibility until you can get your party name printed on the ballot," Martell said.

It's too late for the Green Party to hold primaries in North Carolina this election season but Green candidates may be nominated for the General Election at a party convention.

It's been difficult for smaller groups to become official parties because they had to collect more than 90,000 signatures of voters. A law approved last October lowers that threshold and also approves a new method based on whether the party has fielded candidates in at least 35 other states.

With a polarizing President in the White House and gerrymandered districts in the courthouse, disillusionment with the two-party system in American politics seems to be at an all time high.  A recently passed North Carolina law will make it easier for third parties to get on the ballot this year – but only if a partisan fight between Republicans and Democrats in Raleigh gets resolved.