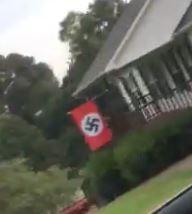 In the wake of the weekend's racially-tainted violence in Charlottesville, Virginia - tensions have flared in other communities, especially across the South.  In Durham, protesters toppled a monument of a Confederate soldier that has stood outside the old Durham County courthouse since 1924.

And, since Sunday - a brief encounter in a Gaston County neighborhood has brought more emotions to the surface.  A video from the Facebook page of a Mount Holly woman named Page Braswell has gone viral.  She confronted a man who was flying the Nazi flag at his home. He told her his name is Joe Love. WFAE's Mark Rumsey spoke to Braswell about her encounter.