Princeville is home to about 2,200 people. The National Guard has been working day and night pumping millions of gallons of water out of the town. This is the second time the town has flooded in 20 years, and questions are beginning to arise - should Princeville rebuild or relocate?

“Not gonna happen. We will not leave the Town of Princeville,” said Princeville Mayor Bobbie Jones. “We are the oldest town chartered by blacks in America. Nobody else can say that.”

But it’s unclear what will happen once residents return to the flood-damaged town.

On a recent day, water rushed back into the Tar River as crews pumped water out of the streets of Princeville.

"That’s what they’re doing, yes ma’am, pumping it out of town and into the Tar River," Barger said.

The dike level in Princeville is 37 feet. Hurricane Matthew produced 36.1 feet of water, enough to swell from the sides into town. It’s enough to make you cry and laugh when you can.

Mayor Jones said many resident have still not returned to their homes.

“I had one person call me and ask me about the goldfish,” he said. “They want to get back in to get their goldfish. I said ‘Ma’am, the goldfish can swim, let’s get the people out first’."

Jones has spent a lot of time standing on the Tarboro side of the Tar River Bridge – which links Tarboro to Princeville. He was recently taken by boat to see his home.

“And it is underwater, about three-fourths," he said.

Nothing to laugh about. This time, Jones evacuated with a few items, like suits for his job as mayor and as an assistant principal at Tarboro High School. Seventeen years ago when Hurricane Floyd stormed through, he had to be plucked out of Princeville by helicopter. Even with such memories and realities, Jones said he will never leave Princeville.

But there will likely be a lot of politics surrounding whether to rebuild Princeville or relocate its residents. It was a topic of discussion at this week’s gubernatorial debate. Incumbent Governor Pat McCrory said he has started having this conversation with Princeville residents, including Mayor Jones.

“We’re going to have that discussion,” McCrory said. “If we do rebuild, where and how?"

Gubernatorial challenger Attorney General Roy Cooper said he lived through Hurricane Floyd, and remembers it was a good decision to not rebuild in some areas.

“There were some places that were not rebuilt and it was a wise thing because they were flooded again," Cooper said. "But clearly we have some places like Princeville and others that were hit twice and we’re really going to have some strong conversations about that.”

While a team of experts and community stakeholders begin to meet in Raleigh, Princeville residents like William and Sheila Johnson just want to go home – to see their home. 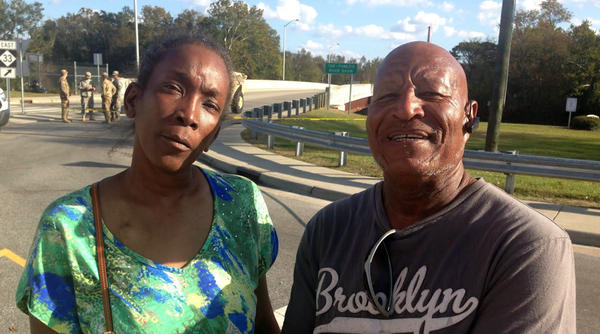 Inspection teams are going neighborhood to neighborhood, using a color-coded system to determine the status of properties around town. Green means residents are cleared to re-enter their home; yellow means they can go inside and salvage what’s left; and red means they can’t enter the condemned property. At least 50 percent of the homes in Princeville fall in that last category.

The Johnsons have lived in Princeville for decades. Like Mayor Jones and several other Princeville residents, they’re standing near the Tar River Bridge, looking over at Princeville.

Sheila Johnson said it would be hard to weather any more flooding.

"I would like my house to be sitting on stilts if they can, I sure would because it’s a devastating thing to have to go through twice," Sheila Johnson said.

As floodwaters finally recede away from eastern North Carolina, families have returned to their homes to survey the damage and pick up the pieces.

What they are finding is that this could end up as one of the costliest storms in U.S. history.

Residents in Fayetteville, Greenville and small towns throughout southeastern North Carolina are facing the outlook of long-term recovery from Hurricane Matthew’s destructive flooding.

Floodwaters in eastern North Carolina are still rising, but so far haven't swamped any of Duke Energy's active coal ash ponds. But environmentalists worry about older, dry, coal-ash basins that did flood. And they're concerned about how animal waste and dead livestock will affect water quality.

Floodwaters have destroyed the historical town of Princeville, which was founded by freed slaves in 1865. North Carolina Gov. Pat McCrory has vowed to restore the town of 2,000.

Here & Now‘s Robin Young speaks with Will Michaels of WUNC about the continuing effects of the the Hurricane Matthew.

Rebuilding Beaches: Worth the Cost?

Rob Young: We definitely incentivize rebuilding at the moment.