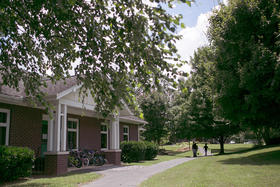 In February, Congress enacted legislation geared at keeping children out of foster care and in a stable home with their family. The Family First Prevention Services Act frees up $8 billion in federal funds once allocated for foster care and adoption and allows states to use it for prevention.

The idea is to invest more money in tools that resolve family problems through substance abuse treatment, mental health counseling and parenting classes. The act also cuts the amount of time children can spend in group homes and limits funding available to those in congregate-care settings.

Many are praising this as a much needed reform to overhaul the foster care system. However some advocates are concerned about what will happen to group homes and the children who have no other housing options.

Frank Taylor is managing editor of Carolina Public Press. He joins guest host Anita Rao to talk about the unintended consequences of this new legislation and the potential impact on North Carolina.

On the goal of the new law:

It’s going to try to prevent children from having to enter the system by finding other solutions than foster care placements and group home placements. But it wants to find the most stable placements possible when kids do have to go into foster care and that doesn’t include group homes.

On the law’s impact in North Carolina:

In North Carolina, if you look at foster care versus group homes, about one in five children that are looking at those options end up in group homes … The future of those kids is uncertain .. There’s a lack of communication about how this [the new law] is going to be implemented.

On whether or not the new law will negatively impact group homes:

When [group homes] get the new guidelines on federal implementations, it’s possible that it will solve all of these problems. They don’t seem to think that’s the case, but they don’t know. It really is a wait and see situation right now.

On the debate among child advocates over the pros and cons of the law:

I’m finding there’s not a consensus out there among advocates in the state or nationally. Some of them want group homes to go away as soon as possible. Others are saying kind of the same thing, but they see this issue of what’s going to happen to the kids.