The increases were generally met with few objections and heralded as long overdue.

Left out of the press releases, however, was a shift that reduced teaching assistant positions, something that will hurt disadvantaged students across the state.

After steady, if slight, growth in teaching positions through 2009, the number of positions has taken steps backward in the following seven years. The 21,048 teaching assistant positions during the 2015-16 school year was 30 percent below the number of similar positions in 2008-09.

The downward trend has happened despite legislative promises this decline wouldn't happen. After approving a pay raise for teachers in 2014, Senate leader Phil Berger said, "The budget will also preserve teacher assistant positions, protect classroom funding and continue to give superintendents broad flexibility to tailor classroom spending to their district's needs."

When asked about his comments, Berger's spokeswoman Shelly Carver said that funding levels stayed the same, but the state did not narrowly dictate that local school boards use the money only for teaching assistants.

"In other words, the General Assembly has maintained the FY 2014-15 level of funding for teacher assistants and stopped local school districts from transferring funds out of the teacher assistant allotment since 2015," Carver wrote in an email. "Obviously we cannot control fluctuations in federally/locally funded positions or changes due to declining enrollment in some districts."

This trend has happened at the same time that new research directly links student success with the existence of teaching assistants, particularly for economically disadvantaged students, according to a 2016 study by led by Helen Ladd, a Duke University professor of economics.

"The evidence shows that additional teaching assistants for disadvantaged student groups contribute to higher test scores," according to the study's findings. "... The consistency of the general patterns suggests that TAs are more productive for the disadvantaged students than for their more advantaged counterparts."

In addition, racial minorities make up a larger percentage of teacher assistants than any other educational position in North Carolina public schools. Minorities represent fewer than one out of five teachers, but make up more than one-third of teaching assistants. 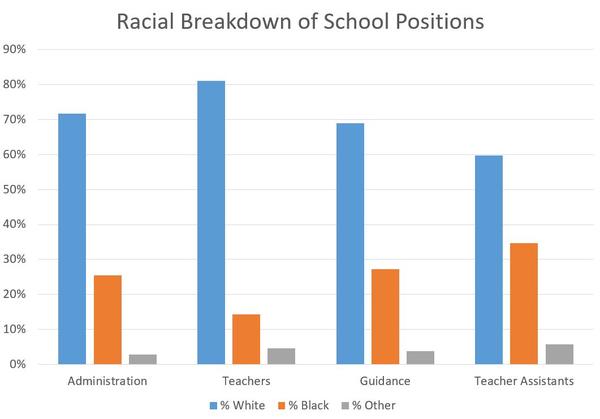 That means minority students are potentially more likely to identify closely with teaching assistants than the primary classroom teachers.

"I think sometimes we underestimate the importance of seeing someone who’s gotten to where you want to go. How powerful that can be to say, 'Hey, if I can just do what Mr. Jones does, then I can get to where I need to go,'" said Matt Ellinwood, director of Education and Law Project with the North Carolina Justice Center. "And if you never have that person that you can see who’s done it, that can make it more difficult."

Ellinwood added that a more racially diverse teaching population can help with student discipline. For example, he said that a concept of something like respect can have different cultural norms that might be misunderstood.

"There's clearly a value to diversity in general when it comes to education in terms of student outcomes and I think that applies to the teaching force as well as the student population," he said.

Is Asheville Boom Leaving Teachers Behind?

NPR will be in Asheville on Tuesday February 7th for the latest 'Going There' event.  Weekend All Things Considered host Michel Martin will lead a night of performances and discussion on the topic 'What Happens When Your Hometown Gets Hot?' at the Diana Wortham Theater.  Tickets for the event have sold out but there will be a live stream that night to watch.  You can also join the conversation on Twitter by following @NPRMichel and @WCQS using the hashtag #HotHometown.