Even With Raise, NC Teachers Still 9.4 Percent Below 2009 Earnings 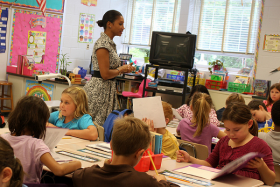 North Carolina teachers are expected to get a raise of $891 this year, on average, which would bump the state up two spots when compared to other states.

The 1.8 percent raise will bring average teacher pay to $50,861 for all teachers in the state. It moves North Carolina from No. 39 in the nation to No. 37, including the District of Columbia, according to the National Education Association.

But the increase of 1.8 percent, which amounts to less than $100 per school-calendar month, ranks as the 19th biggest average raise compared with other states. So in many ways it only keeps pace with other states. That's why North Carolina jumped just two spots in the national rankings.

Furthermore, when adjusting for inflation, teachers actually earn 9.4 percent less today than they did in 2009, according to NEA. That's the 10th biggest drop in the nation.

"Our students deserve public schools that have the resources they need to be successful and educators who are respected like the professionals they are," Mark Jewell, the president of the N.C. Association of Educators, wrote in a statement. "Instead of prioritizing corporate boardrooms, our elected leaders should be making critical investments in our classrooms."

Teacher pay has been a political focus point for years, with both Republicans and Democrats blaming each other for not moving quickly enough on the issue.

The interactive chart below shows teacher pay rankings by state. Note, it does not include the District of Columbia. North Carolina ranks 37th when factoring in D.C. and 36th when comparing just the 50 states.

Teachers in Arizona are protesting for higher pay, while Kentucky educators rallied at their state capitol this Friday. The same day, Oklahoma teachers ended a 9-day walkout, rivaling the length of time West Virginia teachers left their classrooms last month. Distressed teachers seeking higher pay and better funding for education have created a movement in red states, leaving some to wonder, will North Carolina teachers join in next?

Now that the state House has released its plan for teacher pay, there are three plans before lawmakers as they continue budget negotiations. Here are the basic differences:

Listen
Listening...
/
Gov. Roy Cooper proposed 5 percent average pay raises for teachers for each of the next two years.

Gov. Roy Cooper proposed average pay raises of 5 percent for teachers this year and next year in his upcoming budget. He made the announcement Monday at Collinswood Language Academy in Charlotte, surrounded by teachers.

Gov. Cooper says the two-year teacher pay raise will cost the state $813 million and he says taxes would not be raised to make it happen.

The increases were generally met with few objections and heralded as long overdue.

Left out of the press releases, however, was a shift that reduced teaching assistant positions, something that will hurt disadvantaged students across the state.