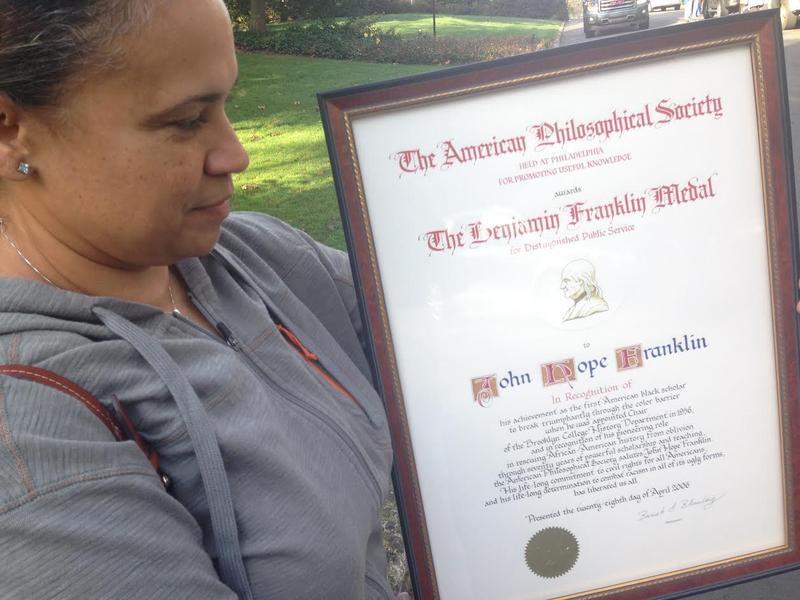 Franklin was a world-renowned scholar of African American history who died in 2009. People lined up hours early to honor the man who influenced how the world thinks about slavery and, of course, to purchase some of his possessions.

You can call it an estate sale or a tag sale. The bottom line is everything had to go.

There was a steady stream of shoppers, like Chuck Samuels. Gay Gasper Pleasant and her estate company organized the sale.

“Any books?" said Pleasant, as she counted all the items Samuels put on the check-out table. "No? You're the first one."

Samuels was amazed at what was still inside the Franklin home. He purchased glassware and the piano.

“Well you know, it seems a bit bittersweet because there do seem to be some things that I would think should belong in a museum, you know," Samuels said.

Pleasant agreed.  While prepping for the sale, she discovered several great finds.

“One of the first books I picked up and pulled out of the shelf, I opened and it was signed by the author,  Fred Gray, who was the author of 'Bus Ride to Justice," said Pleasant, full of excitement. "I said to my son, 'This was...Rosa Parks's attorney, and Martin Luther King’s attorney and he dedicated it to Dr. Franklin'.”

The biggest draw had to be the thousands of books. There were hundreds alone on slavery, the South, the Civil War and Reconstruction – Franklin’s specialty.

Many of the people perusing Franklin’s shelves were in a daze, some cried and others sat in chairs reading as if they were in a library.  Tina Bryant clutched a framed award presented to Franklin by the American Philosophical Society.  Bryant may use it as a history lesson at work or at home for her daughter.

“Ugly racism still exists as we all know, but she never saw it in some of its ugliest and rarest forms," said Bryant. "So, maybe hang it up at home first and begin those conversations there with my 12-year-old and transition it, eventually.”

Courtney Reid-Eaton sat outside Franklin’s stately two-story, 1930s home on a wooden bench, which she purchased, along with a briefcase and two of Franklin’s many doctoral hoods he wore at graduations.

“And some of them have, like labels in them with his name in them like when your kid goes to camp and you have your name," said Reid-Eaton. "I’m over the moon.”

The estate sale planners said it was their favorite one yet, because everyone was so happy. Some of the more important things are already at the John Hope Franklin Center at Duke University.