E-Cigarette Use Among NC High Schoolers Still On The Rise

More high school students in the state say they are using e-cigarettes, or plan to start in the next year.

This is the third time in a row that the North Carolina Youth Tobacco Survey showed a rise in high schoolers using emerging tobacco products - including e-cigarettes, dissolvable tobacco and hookah, among others. It's the highest usage recorded since the survey started asking students about the products in 2011. Overall tobacco use among high schoolers also inched up as a result. 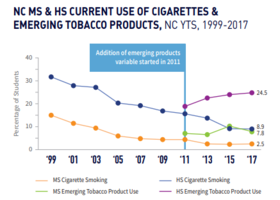 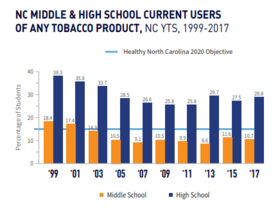 About 17 percent of high schoolers said they have used e-cigarettes, and nearly a quarter said they would consider using them in the next year. 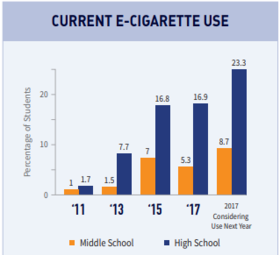 Public health officials say this is concerning, because the products can have as much or more of the highly-addictive nicotine found in traditional cigarettes.

"We know based on the data and the science that nicotine exposure can harm brain development, especially when used during adolescence," said Susan Kansagra of the North Carolina Department of Public Health. "We also know that use of e-cigarettes can lead to the use of conventional cigarettes."

One in three middle school students who vaped said they started because a friend or family member also used e-cigarettes, while high schoolers' top reason for vaping was because the products come in different flavors.

The North Carolina Youth Tobacco Survey is given to students across the state every other year. The anonmyous survey received 6,333 responses from a representative sample of students this year.

A common DNA variant can predict heavy smoking and lung cancer. Researchers from RTI International studied nearly 39,000 smokers and found that this gene variant is linked with nicotine dependence.

Report: North Carolina Failing To Prevent And Reduce Tobacco Use

A report from the American Lung Association says North Carolina should do more to prevent and reduce tobacco use.

The group's annual "Tobacco Control Report Card" gave the state an "F" in every category it measures: funding for tobacco prevention and control programs, tobacco taxes, smoke-free air, access to cessation services, and laws that raise the smoking age to 21.