A new Duke University study has found high levels of selenium in fish at two lakes near Duke Energy coal-ash sites in North Carolina. But Duke Energy says its own studies have found no problems with fish from the lakes.

The study published in the journal Environmental Science & Technology found elevated selenium levels in fish from lakes near the Sutton plant in Wilmington and the Mayo plant in Roxboro.

Selenium at a third lake - Mountain Island near Charlotte - was within the federal EPA standard. 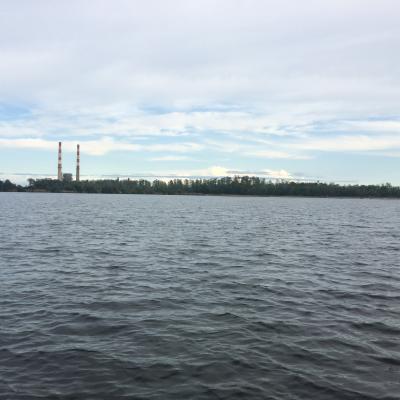 Selenium occurs naturally and can be concentrated in coal ash, the residue left from burning coal. It can cause deformities, growth problems and even death in fish and other animals. This study didn't evaluate health risks to humans.

The Duke scientists measured selenium in surface water, bottom-sediment waters and fish in the three lakes, which all have received discharges from coal-ash storage basins near Duke power plants. Three similar lakes that have not had coal-ash runoff also were tested during the three-month study in 2015 - Adger, Tillery and Waccamaw.

“Catastrophic releases of coal ash like the Dan River spill of 2014 get all of the attention, but there is ongoing, continuous contamination of aquatic ecosystems from hundreds of coal ash ponds across the country,” said the study's leader, Jessica Brandt, a doctoral student in environmental health at Duke.  “People fish in these lakes for recreation and subsistence purposes. We want to protect these public resources.”

"These three reservoirs were created to receive wastewater from power plants, and we diligently meet permit limits that were designed to protect the environment through the decades these industrial facilities operated to serve customers," Culbert said.

Both the Sutton plant in Wilmington and Riverbend in Mount Holly, near Mountain Island Lake, have been retired and Duke Energy is cleaning up coal ash basins near the old plants. The Roxboro plant is still operating, but Duke has announced plans to close the coal ash basin there as well.

Duke Energy has given state environmental officials details of how it plans to provide safe, permanent water supplies to people who live near the company's coal ash dumps.  The filings, for all but two plants, comply with a state law requiring the plans by Dec. 15.

Duke Energy has agreed to pay at least $1 million to settle a federal lawsuit by environmental groups over water pollution near a now-retired coal-fired power plant in Wilmington.

Duke Plans To Leave Coal Ash In Place At 6 Plants

As Duke Energy and environmentalists have debated the safety of private wells near coal ash ponds, they've disagreed about the source of a carcinogen called hexavalent chromium. Scientists at Duke University figured out how to identify the chemical’s source. Conclusions from the study of 376 private wells say coal ash likely isn't to blame. WFAE's David Boraks talked with the study's lead author, Avner Vengosh about his research and recommendations.

One of the big debates over the safety of drinking water wells near coal cash ponds is whether a carcinogenic chemical called hexavalent chromium is naturally-occurring. Duke Energy says it is, while environmentalists say Duke’s coal ash ponds are to blame for polluted wells. A new Duke University study shows the chemical does occur naturally and contamination likely isn’t from coal ash.