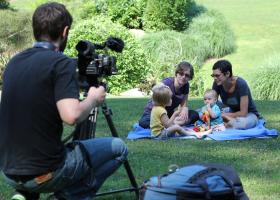 When filmmaker Rick Dillwood agreed to donate sperm to his neighbors, he hardly knew them. Mel and Carey Downey-Piper had been seeking a known donor but not a good friend. However, after many months of celebration and hardship, the three became very close. Dillwood recorded their journey in a documentary called "Between Friends & Family".
Host Frank Stasio talks with Rick Dillwood and Carey Downey-Piper.
Copyright 2014 WUNC-FM. To see more, visit http://wunc.org.