Related Program:
The State of Things

Doctors Get Big Bucks From Drug And Medical Device Industries 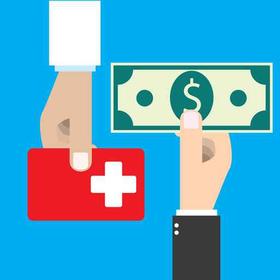 North Carolina's doctor offices are awash in pharmaceutical and medical device industry cash. These financial relationships are starting to raise questions about prescribing habits and other conflicts of interest.

Already, some large pharmaceutical companies have paid millions to settle allegations of kickback schemes, and watchdog groups are asking questions about deep relationships between some doctors and drug and medical device companies.

Consider some pretty staggering figures. In 2016 alone, the pharmaceutical and medical device industries made more than 365,000 payments – 1,000 per day on average – to more than 31,000 physicians totaling $74 million in North Carolina alone. Nationwide, industry made 12 million payments worth close to $8.2 billion. Since 2013, medical providers have received almost $25 billion from industry.

These payments have collectively been referred to as Open Payments and are searchable for 2014 through 2016 through the Centers for Medicare and Medicaid Services.

Increasingly, it is becoming clear that the majority of these payments go to a handful of doctors. Ten North Carolina Physicians received at least 365 individual payments, while nearly 24,000 physicians received fewer than 12 payments in the year.

Similarly, just 160 physicians – one-half of 1 percent of the North Carolina physicians receiving payments – accounted for more than half of the total that industry spent in this state. Some 17,500 doctors received a total of $120 or less in the entire year.

But the sheer volume of payments made in this state shows the effort of industry to get time with doctors. Many of the payments are in the form of food and beverage. It's legal for drug reps take physicians out to lunch in order to pitch them on a cholesterol drug, for example. Sometimes reps will drop off boxed lunches at a provider's office with free samples of a diabetes treatment.

WUNC contacted more than two dozen physicians in North Carolina that received the most from industry. None returned phone calls, or agreed to speak on the record. Of the 20 physicians to receive the most money in 2016, eight practice with OrthoCarolina, a large orthopedic practice in Charlotte. The practice is affiliated with Carolinas HealthCare System, which is itself in partnership talks with UNC Health Care.

Nonprofit news organization ProPublica built a user-friendly database to search any physician in the country by name. The full datasets are available through a government website.

It's impossible to know all the details behind every payment. However, each payment is categorized with certain identifiers that provide insights, and researchers across health academia have started to make correlations. One study found that physicians who received larger payments from industry were less likely to prescribe generics, which are in some cases far cheaper than branded drugs.

A UNC-Chapel Hill study focused specifically on cancer drugs and found that physicians were more likely to prescribe drugs of companies from which they received payments for food, travel, or speaking engagements.

Dr. Aaron Mitchell, an oncology fellow at the UNC Lineberger Comprehensive Cancer Center, worked on that study. He said that correlation doesn't necessarily mean causation, "But it does look like there is some preference on the part of oncologists for the drugs made by the companies that had given them money."

The N.C. Medical Society represents physicians around the state. In a statement, the organization said it "has always supported the concept of public disclosure of information like that in the Open Payments database. We urge our doctors to check what is reported for accuracy before it is published. One of the NCMS’ longstanding principles is to encourage an open and honest physician-patient relationship. The information in the Open Payments database provides an opportunity for such a conversation between a patient and their doctor about medications being prescribed."

Some doctor groups have argued that contact with the pharmaceutical and medical device industry provides a crucial service to the patient. The U.S. Food and Drug Administration approves dozens of new drugs every year. On top of that, competition among similar drugs can be fierce. A doctor would like to know the benefits of all drugs in a class in order to make the best prescribing decisions.

Critics, however, note that payments from industry can affect prescribing habits. By establishing a relationship with a physician, the drug reps get more opportunity to point out the benefits of their drugs over other manufacturers or over generics, which are almost always cheaper alternatives of the same drug. Doctors might not write a prescription specifically with a kickback in mind, but repeated contact with one company can hold sway.

“There are inherent tensions between the profits of health care companies, the independence of physicians and the integrity of our work, and the affordability of medical care,” said Dr. Robert Steinbrook, who wrote an editor’s note in JAMA Internal Medicine about payments from pharma to physicians. “If drug and device manufacturers were to stop sending money to physicians for promotional speaking, meals and other activities without clear medical justifications and invest more in independent bona fide research on safety, effectiveness and affordability, our patients and the health care system would be better off.”

Of course, in some cases, a kickback scheme is very much in play. Last year, drug giant Valeant Pharmaceuticals agreed to pay $54 million to settle federal allegations that these kinds of payments were kickbacks. The payments happened at Salix Pharmaceuticals, a Raleigh-based drug company acquired by Valeant.

“Salix found a way to pay doctors money and treated them to fancy meals to push their drugs,” said former U.S. Attorney Preet Bharara when making the settlement public.

But cases like that are few, and Dr. Mitchell, the UNC researcher, points out that while research has shown a correlation between industry payments and prescribing habits, the research hasn't yet proven a definitive influence. He makes a chicken-and-egg analogy. It's possible that a physician likes one drug over another because she has seen the biggest benefit from that one drug. So she prescribes more of it. Because of those higher rates of prescriptions, that drug's company notices the physician and then invites her out for speaking engagements.

Mitchell said he hopes some of those directional studies will happen soon as more years of the Open Payments data become available.