Did A Shell Company Help the NRA Secure Tillis’ Victory? 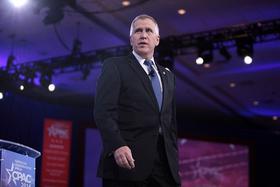 Powerful, wealthy organizations like the National Rifle Association might want to buy elections, but campaign finance laws stop them from doing so. At least, they’re supposed to.

Listen
Listening...
/
Guest host Anita Rao talks with The Trace staff writer Mike Spies about his report published in Politico Magazine that suggests the NRA may have influence the election of Senator Tom Tillis.

Reporting by The Trace, an independent news outlet centered on issues of gun violence, and published in Politico Magazine suggests the NRA may have circumvented those regulations. Mike Spies, who authored the piece, writes that the NRA paid a marketing firm called Starboard Strategic millions of dollars on advertisements supporting Thom Tillis’s 2014 bid for the Senate. Meanwhile, the Tillis campaign paid millions to a company called OnMessage to provide campaign advertising. Spies’s reporting suggests those companies are one and the same and that they may not have operated in accordance with federal law.

Guest host Anita Rao talks with The Trace staff writer Mike Spies about how this potential shell company may have shaped one of the most expensive and close Senate races in American history.