Degree Of Voter Chill Is Key To Presidential Victory

Much has been made about the favorability, or more notably, the lack thereof, of both Hillary Clinton and Donald Trump. Along with all of the other aspects that the 2016 presidential election has "rewritten" in terms of how we normally expect campaigns to play out, this year’s election is shaping up as one of "who do the voters detest the least?"

In looking at Hillary Clinton’s unfavorable numbers, before April 2015, the former secretary of state and first lady had a positive favorable rating, albeit with relatively high unfavorable numbers. But the same month that she announced her bid for the White House, her unfavorable numbers moved higher and the Democratic contender saw the spread widen between her negative and positive numbers, culminating in the most recent polling of around 55 percent unfavorable to 40 percent favorable.

This would seem to be a catastrophic condition for any presidential candidate—if not for the other candidate having even deeper negatives.

In the American National Election Studies surveys going back to 1968, respondents were asked to rate their feelings towards each candidate on a scale of zero to 100, with 50 being neither a warm nor cold feeling toward the candidate. 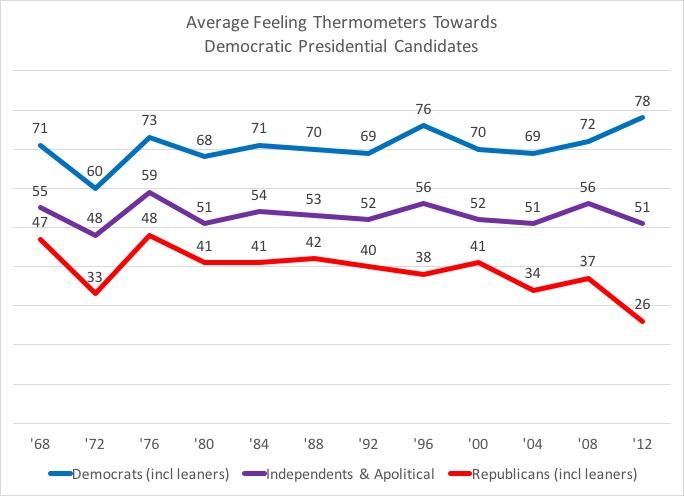 For example, in 1972, Richard Nixon’s average feeling was 66, compared to George McGovern’s 49, to be matched only by Mitt Romney in 2012 with an average feeling thermometer of 47.

The two elections where both candidates were basically tied in their average feelings—1980 and 2000—saw two different elections: 1980 saw Reagan soundly defeat the incumbent president Jimmy Carter, while in 2000, Al Gore held a one-point advantage in the respondents’ feelings, and subsequently won the popular vote while losing the electoral vote.

Over time and with the rise of our current era of polarized partisanship, one can see the differences in feelings between self-identified partisans (including independents who lean to one party) and independents in between over the past nearly fifty years.

In 1968, an election that was among the most bitterly divided in modern American history and that many are trying to compare this year’s election to, the differences between how partisans viewed each party’s presidential candidate was 24 (towards Humphrey) and 21 (towards Nixon). A difference, but nowhere near what 2012 had to offer. 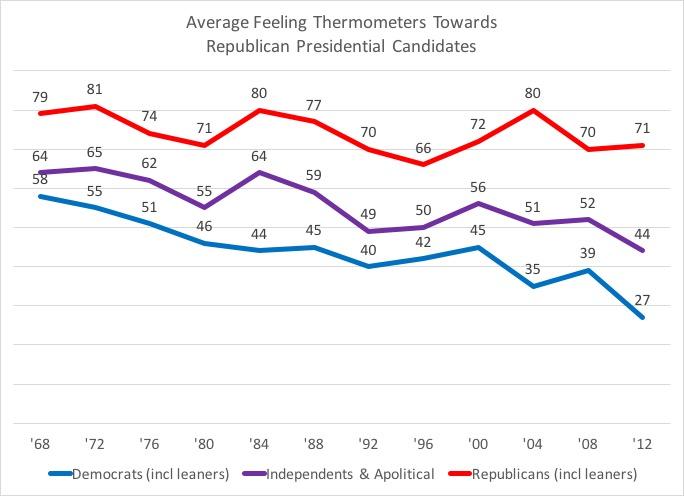 In fact, splitting these partisans into their party "strength" of how they self-identify, the differences between Obama and Romney are considerable. Seventy-one percent of strong Democrats had a fairly cool (or very cool) feeling towards Romney, while 82 percent of strong Republicans had a warm or very warm feeling.

Notably, Romney garnered a 40 warm/35 cool response from political independents, while Obama garnered a 58 warm/27 cool from those in the middle of the partisan spectrum.

With both of this year's candidates experiencing such high negatives, the reaction by both strong partisans and independents will be interesting to watch as to how they feel towards both candidates. If early polling is any indication, there won’t be much love or warmth toward either candidate. The real test for November may be which candidate has the least 'chill' from the voters.

A Review of the Democratic, Republican Conventions

Modern-day nominating conventions have become nothing more than ‘infomercials’ for both political parties, and this year's Democratic and Republican national party conventions were indeed that. However, both presented stark contrasts in terms of the product they were selling to the American electorate for purchase this coming November.

As is tradition, the party out of power of the White House went first, and the one word that seems to sum up the Republican’s nomination of Donald J. Trump was anger.

Now That Voting Law Overturned, What Can We Expect in November?

A federal appeals court had some strong language in last week’s decision that struck down North Carolina's 2013 voting law overhaul. The judges concluded that lawmakers had deliberately passed the law with the intent of curbing voter turnout among African-Americans.

Sen. Bob Rucho, R-Mecklenburg, says the court should be "embarrassed" by that conclusion. He was one of the architects of the voting law.

What To Look For As Voter Pool Changes Leading To November

Heading into the general election, I'm analyzing the voter registration pool for North Carolina at the beginning of each month, watching for key trends and development of certain voting groups.

Granted, North Carolina’s potential electorate can expand between now and November, but an early breakdown of the voter registration pool can give some hint of who is eligible to cast their ballots in the fall.