In Carolinas, DACA Recipients Press On Despite Uncertainty 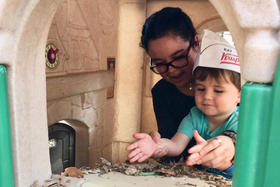 DREAMers, children brought to the United States by their parents and living in the country illegally, are still uncertain about the future of the program that allows them to work and drive, and protects them from deportation.

Last year, President Trump set an expiration date for the program in early March and said it was up to Congress to come up with a permanent fix. That hasn’t happened, but lower courts have blocked the president’s decision to end the Deferred Action for Childhood Arrivals program. As the case makes its way through the courts, the future for DACA recipients is unclear.

“I want rainbow sprinkles on icing with vanilla," said Hayes.

Jimenez and the boys make these pretend deserts out of leaves. She’s been a nanny for the Helton boys for a few years. Jimenez is 20 years old and has been in Charlotte since the first grade. Her parents brought her and her sister to the U.S. from the southwestern state of Jalisco, Mexico.

“This is all I know," Jimenez said. "I don’t remember much from Mexico. I grew up here speaking English. [I just spoke] Spanish[at]home, but English everywhere else. It's literally all I know."

Jimenez got her DACA status at the age of 14. The process included interviews with the federal government and fingerprints. She said it was an intimidating process, but well worth it.When she received her DACA status, she was thrilled.

“I can go on school trips, I have my own social security card," she said. "And I can start working when I turn 16.”

Her DACA status has allowed her to drive, work and go to college. She took some classes at Central Piedmont Community College but had to pay out-of-state tuition. She’s saving up to study nursing at Queens University. Jimenez helps her parent’s clean restaurants at night, in addition to her multiple nanny jobs and other part-time work at the Jewish Community Center.

DACA’s uncertain future has spurred conversations about what to do if deportations start.

“We definitely have a plan," Jimenez said. "My mom always says if anything happens, then we’ll all go back.”

Jimenez is relieved her DACA permit lasts through 2019.

Kiara is another DACA recipient. Like Jimenez, her permit also lasts through 2019. 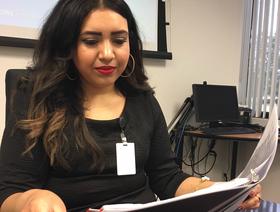 Kiara lives in Lancaster, South Carolina. We are only using her first name because some of her family members are undocumented immigrants. Kiara is 25 and has a marketing job.

Up to this point, she had kept private about her DACA status.

“Now, my biggest issue with being very outspoken about the situation is the lash back," she said.

She's referring to comments she's seen on social media and recalls one time during a mission trip in West Virginia. According to Kiara, the family she was staying with didn’t know her DACA status and criticized undocumented immigrants as hurting the country.

“It’s like he was taking straight to me and didn’t even realize it," Kiara said.

She came to the U.S. with her family from Honduras 17 years ago. She entered the country on a visa and ended up staying after it expired.

Kiara said she just starting speaking out a few months ago because she figures people know DACA recipients and don’t even realize it.

Kiara is hopeful the DACA debate will be resolved with an eventual path to citizenship.

In September, President Trump said the program would expire in March. That meant no new people could get DACA status and the roughly 800 thousand people who had it would lose their protected status when their individual permits expired.

There are about 25,000 DACA recipients in North Carolina and 6,000 in South Carolina.

The Trump administration then asked the Supreme Court to weigh in.  Earlier this week, justices declined to take the case until an appeals court hears it. There isn't an indication of when that will happen yet, so the fate of the program remains uncertain. 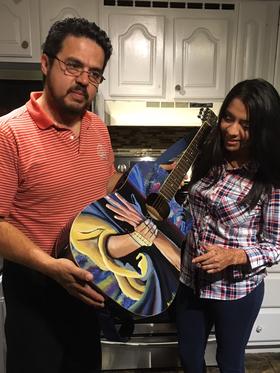 There is a bit of concern about how ending the DACA program would impact parents of DACA recipients. In order to get the status, a DACA recipient has to give the federal government information, including an address and parents’ names.

In Erika Macias Hernandez's case, both of her parents are undocumented. Turning over all of those personal details scared her dad Raul Macias.

“Every day that we wake up we have to decide to go [our] job and drive without a license," he said. "That is some of the decisions we make every day. If there is an opportunity for [our children and] not for us, we have to take it.”

Erika has been able to go to community college in the U.S. since getting her DACA status and works at an art studio. She’s lived here for 18 years and Raul is insistent it’s better for her to get an education in the United States. Raul said he and his wife will do what it takes to give their daughter that chance.

Erika said her family has started to talk about backup plans in case she no longer has protected status. After months of uncertainty about the program’s future, Erika said it has brought her closer to her family and church members.

“I feel like the closeness that we’ve experienced way surpasses that fear," Erika said. "So that we know that either way we have to go somewhere as long as we're together still a family."

Mountain Latinos High Spirited As They Fight Back Against DACA Decision

Progressive groups in Western North Carolina are pushing back against the Trump administration’s decision to end the DACA program in six months. BPR’s Davin Eldridge has more…

Well over a hundred demonstrators, mostly students, turned out to protest the administration’s decision at Western Carolina University. They made their objections heard next to the college’s so-called Fountain of Wisdom, in the center of campus. The crowds chanted "si se puede".