ShareTweetEmail
Listen
Listening...
/
Jeff Tiberii reports on bills that have been introduced in the General Assembly that would raise the amount of beer a small brewer could produce and not have to be forced to partner with a distributor.

The king of beers is, well, still the king of beers. But the hundreds of small breweries, including many in North Carolina, are quickly gaining steam.

Total beer consumption has changed very little in the past decade. What has changed, however, is the brands that Americans grab at the store; and those choices are increasingly from imports and craft breweries.

To be sure, the giants like A-B Inbev, maker of Budweiser, and MillerCoors still ship the lion's share of beer. Consider the top four brands alone, Bud Light, Coors Light, Budweiser and Miller Lite, held 38 percent of the entire beer market in 2015, according to Beer Marketer's Insights, which has tracked the beer industry for more than four decades.

In other words, more than one out of every three beers consumed in the United States is one of those four brands.

While that's significant, the share is shrinking. In 2013, those four brands controlled nearly 41 percent of the market. That market share has shifted to imports and craft beers, which each saw a more than 6 percent increase in U.S. sales from 2015 to 2016, according to the Brewers Association, a national advocacy group. 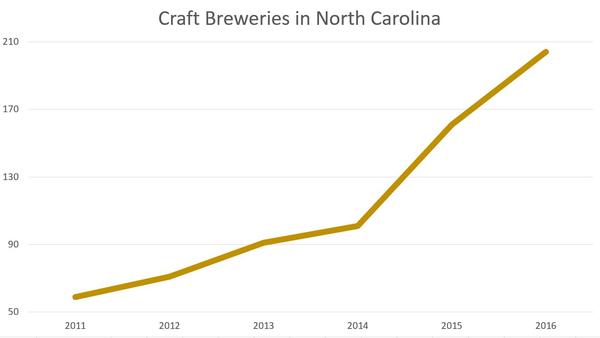 This increasingly refined beer palate has translated to a spike in small breweries. North Carolina now boasts 204 local breweries, many clustered around Raleigh, Durham and Asheville. The money has followed. The Brewers Association estimates local breweries had an economic impact of $1.2 billion on North Carolina in 2014, a figure sure to have increased in the subsequent years.

As a growing part of the economy, these brewers have gained clout with lawmakers. This year, they want to change a little-known law they say hampers growth.

In North Carolina, small breweries may self distribute their lagers, ales and stouts up to only 25,000 barrels a year. After that, they must work with a licensed distributor. One barrel equals roughly two kegs, or about 330 bottles of beer.

The craft breweries want this cap upped to 200,000 barrels a year, which would give them plenty of runway to ferment into a fully mature company before needing to work with a third-party distributor. Naturally, the distributors – there are more than 270 in the state – oppose the measure and are no strangers on Jones Street.

With some hot-button issues (ahem, HB2) in the rearview mirror, and given the general popularity of the topic, the proposal to increase the beer cap, filed as HB500, could take a high profile stage this summer. The result could impact jobs, supply chains and even the availability and price of the sometimes interesting flavors of craft beer in North Carolina.

As breweries grow, they make investments just like any other small business. Refurbished warehouses and industrial parks often serve as the backdrop for an array of pints and flights flavored with hops, barely, chocolate, berries, sweet potatoes and even beets.

"It allows us to be able to get our beer out to the masses much, much easier. This allows us to have beer packaged when it’s absolutely ready and as fresh as possible," said Scott Craddock, the company's head brewer.

In the past few years Raleigh Brewing has gone from producing 800 barrels of beer annually, to about 7,000 a year. Presently, the company distributes its own beer to grocery stores, restaurants and bottle shops, mostly in the Triangle.

Kristie Nystedt owns the brewery. She opened it with her husband four years ago. "I think in order to be an entrepreneur you have to be a little bit of an adrenaline junkie," she said.

With the business expanding, Nystedt is well aware of a state law limiting self distribution to 25,000 barrels annually. She's among those opposed to it, and calling for change. "I would not sign over our rights to a distribution company so we would restrict our growth; we would not go over the 25,000 barrels. We would no longer be able to invest in people and trucks and so forth, so we would shrink." 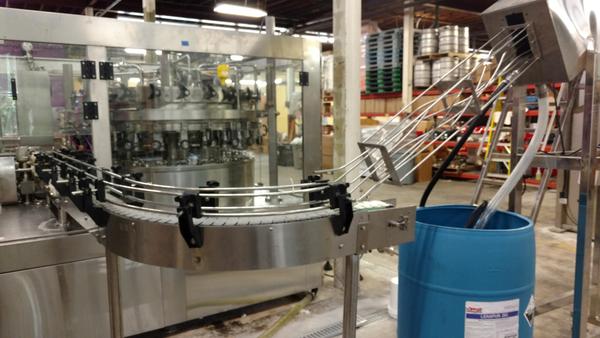 Brewers argue that lifting the cap supports free enterprise, small businesses, tourism and manufacturing jobs. Their allies range from hipsters to conservatives – who are calling on the legislature to advance HB500. While Raleigh Brewing is years away from hitting the current limit, there are three businesses at the threshold. Red Oak in Guilford County, as well as No-Da in Mecklenburg County, and Old Meck, in Charlotte. That last one was founded by John Marino in 2007.

"It’s a disaster for us. In essence is going to have to change, if this law does not get changed this year," he said. "Why is North Carolina holding down their local manufacturing businesses? I have no idea. It makes no sense."

Of course there are some who believe the cap should exist. Tim Kent is a lobbyist with the North Carolina beer and Wine wholesaler. He represents a group of 30 family owned distributors in the state.

"Our folks have invested hundreds of millions of dollars in jobs in trucks and in warehouses and whenever a piece of legislation is introduced that puts those jobs in jeopardy, you bet we’re going to be involved."

These wholesalers, also called distributors, have been in place since the 1970s. According to Kent, the average wholesaler has about 980 selections of beer in its portfolio, a figure for which a 12-bottle and 16-ounce can of the same beer would count as two different selections. He acknowledged the growth of craft beer in North Carolina and said he would be willing to discuss a change to the cap, but an increase of this magnitude is a non-starter.

He raised concerns about what Budweiser, Coors and Miller would then do; one of his fears is that the distributors he represents could become obsolete. He framed the argument that the cap actually helps smaller breweries by giving them a better path to market.

Furthermore, increasing the cap would affect only a few craft breweries that have already grown relatively large. Across the nation, 90 percent of all craft breweries produce fewer than 7,000 barrels per year, according to Kent, a figure well below the existing 25,000-barrel cap.

In one regard, the tug-of-war shows the growth of the craft beer scene. In 2001, there were only 38 brewer licenses in the entire state, a figure that grew only modestly to 59 by 2011. Then, the number of craft breweries started to grow year by year and hopped to 204 by 2016, according to the Brewers Association. North Carolina produced more than 675,000 barrels of craft beer in 2015, ranking it No. 11 in the nation, according to the Brewers Association.

Even with those tailwinds of growth, it will be difficult for small brewers to reach a point when they can cheers each other with a celebratory beer.

Indeed, the beer and wine wholesalers is a political player when it comes to alcohol. According to a review by advocacy group Democracy NC, the wholesalers have donated $1.5 million to state lawmakers since 2013. House Speaker Tim Moore has received nearly $100,000 of those contributions, including from individual wholesalers and a political action committee.

"What I would prefer to see is if there are any changes that they are changes that are worked out among the stakeholders, not anything that would be pushed through in any way whatsoever," he said.

Moore says he's a pilsner guy, calls Old Meck "absolutely great," and recognizes this industry is growing quickly. Marino, the owner of Old Meck admits he’s in an uphill battle, and concedes that even a more modest increase in the cap would help his business grow. He takes a deep breath, smiles, and notes that beer is literally liquid bread – the fresher it is, the better it tastes. He says for now, that might be their most important advantage.

A bipartisan bill sponsored by Henderson County Republican Representative Chuck McGrady aims to give more flexibility to North Carolina craft brewers to run their businesses.  At a news conference last week, McGrady unveiled House Bill 500, an omnibus bill making changes to the way alcohol is governed in the state.

Microbrewing In The Mountains Matures Despite Growing Pains

NPR will be in Asheville on Tuesday February 7th for the latest 'Going There' event.  Weekend All Things Considered host Michel Martin will lead a night of performances and discussion on the topic 'What Happens When Your Hometown Gets Hot?' at the Diana Wortham Theater.  Tickets for the event have sold out but there will be a live stream that night to watch.  You can also join the conversation on Twitter by following @NPRMichel and @WCQS using the hashtag #HotHometown.