Cooper signed Executive Order 80 in a ceremony next to a solar farm at SAS Institute in Cary. He said it "sets the goal for our state to achieve a 40 percent reduction in greenhouse gas emissions by the year 2025."

That's on the base year of 2005, according to the order. Cooper noted that Florence and other major hurricanes have devastated North Carolina in recent years, and said there's a scientific consensus that humans are contributing to climate change.

"This means sea level rise, stronger storms and erratic weather, from drought to floods. It's time for North Carolinians to do our part and take action," he said.

Cooper, a Democrat, is taking a different tack from the Republican-controlled General Assembly, which in recent years has pushed to limit environmental spending and regulations. That includes a 2012 law that bars local governments from using climate science to set their own definitions of sea-level rise to regulate development.

In remarks before the signing, state Environmental Secretary Michael Regan echoed the governor's remarks, saying that fighting climate change and improving the economy can go hand-in-hand.

"We must change how the state considers climate science in our policies, change how we generate and use energy, change how we rebuild and strengthen our communities, and change the current path that has put our health, environmental and economic security at risk," Regan said.

The governor is ordering state agencies to adopt environmentally friendly policies. He wants to increase the number of registered zero-emission vehicles and to promote the growth of clean-energy businesses.

He's also promising a state clean energy plan and is creating a North Carolina Climate Change Interagency Council, to be chaired by Regan. 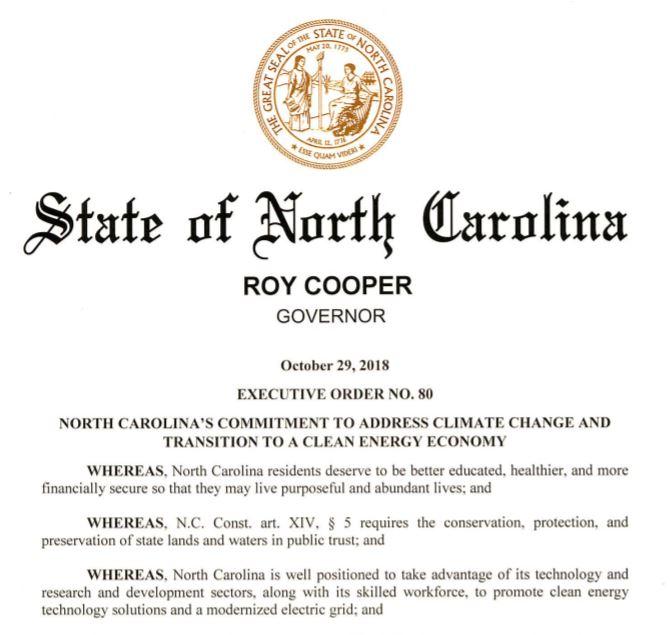 Legislative leaders last week offered their own response to recent hurricanes: Appointing a legislative committee to examine more efficient storm debris removal and flood control techniques in river basins that flooded after Florence.  The committee is expected to submit a report by 2020.

How much does climate change contribute to storms like Hurricane Florence?  Asheville climate scientists are warning climate change is contributing to more powerful storms.  Andrew Jones of Climate Interactive, housed in The Collider in downtown Asheville, says it's like giving the storms steroids.  He spoke with BPR's Jeremy Loeb.

Duke Solar Rebates Have Already Run Out For The Year

Just two weeks after Duke Energy began taking applications for new solar energy rebates, the program has run out of money for homeowners and businesses for this year.

North Carolina joined California, Arizona, Nevada and Texas in seeing the greatest total increases in solar energy generation from 2008 to 2017, according to a report released Tuesday by Environment North Carolina Policy and Research Center.

Listen
Listening...
/
James Morrison reports on how the issue of offshore oil drilling cuts across party lines in political campaigns in North Carolina.

President Trump is putting coastal Republicans in a tight spot this election cycle with his proposal to open waters off the Atlantic coast to oil and gas exploration.