Cooper Fires Back At Republicans After Special Session 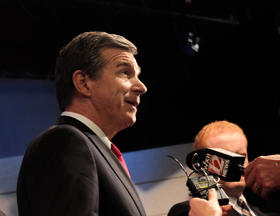 Governor-elect Roy Cooper fired back at Republican lawmakers Thursday in response to their attempts to limit his powers before he even enters office.

The General Assembly is considering a wide-ranging proposal that would roll back many of the governor's powers to appoint boards and cabinet secretaries. Cooper said the measures taken in a special session were more “ominous” than a simple power grab.

“They knew for weeks what they were going to do and they didn't tell the public. That's wrong,” Cooper said. “They need to put these issues out on the table so that the people know about them so that there's time to debate them.”

Republicans have supermajorities in both chambers of the General Assembly, but the governor’s mansion will switch from red to blue when Pat McCrory leaves office and Cooper enters.

During a special session called immediately after one held to appropriate $200 million to victims of Hurricane Matthew and western forest fires, Republican lawmakers added various provisions that would limit the powers of the executive branch.

In a press conference this morning, Cooper said the moves by Republicans would have wide-ranging impacts in education, tax policy, and health care. He also criticized how the special session was called on the heels of disaster relief.

Cooper said he would fight any changes to the governor's authority in court.