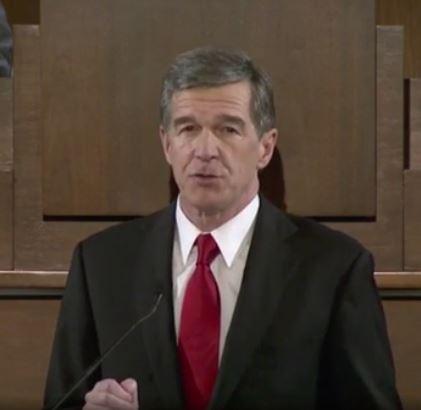 Plaintiffs who had sued the state claiming discrimination asked a judge to approve a settlement with the governor that would ensure transgender people can use restrooms corresponding to their gender identity in facilities run by executive branch agencies that oversee the environment, transportation and Medicaid, among others.

Cooper also issued an executive order prohibiting Cabinet-level departments under his control, including their contractors, from discriminating on the basis of sexual orientation and gender identity.

Plaintiffs said that if the judge agrees with the consent decree's interpretation of the law, they would drop claims against the governor and other defendants.

A lawyer for the American Civil Liberties Union said that the federal judge has leeway to approve the interpretation of the law contained in the consent decree even if legislative leaders oppose it. But cooperation by the remaining defendants would ensure an end to the legal fight.

"The ball is in their court now," ACLU lawyer Chris Brook said. "Do they want to defend discrimination? Do they want to continue this litigation? Those are questions that need to be answered by the UNC System and the legislative leadership."

The UNC system believes the case should be dismissed outright and reiterated its commitment to nondiscrimination policies, spokesman Josh Ellis said.

The state took the "bathroom bill," also known as HB2, off the books in late March after a yearlong backlash that hurt North Carolina's reputation and caused businesses and sports leagues to back out of lucrative events and projects. But in July, LGBT activists announced that they were revamping their lawsuit to target the replacement law, known as HB142, saying it continued the harms of its predecessor.

HB142 eliminated the "bathroom bill" requirement that transgender people use restrooms in many public buildings corresponding to the sex on their birth certificates.

But the new law makes clear that only the General Assembly — not local government or school officials — can make rules for public restrooms from now on. Local governments are also prohibited from enacting new nondiscrimination ordinances for workplaces, hotels and restaurants until December 2020.

The executive order issued late Wednesday was several months in the making. Cooper told Democratic activists in May that he would improve LGBT protections on his own, even as he compromised with GOP legislators on a partial repeal of HB2.

The executive order and consent decree "are important steps toward fighting discrimination and enacting protections throughout state government and across our state," Cooper said in a release. "We've worked with the business community, advocates for the LGBT community and other North Carolinians who know our state is stronger because of our diversity, and I will keep working to make our state a welcoming and inclusive place."

Cooper's office said the order would affect 55,000 state employees and 3,000 vendors for up to $1.5 billion in contracts. The governor said the vendor language would let the state protect more members of the LGBT community outside of state government. The executive order doesn't specifically address bathrooms, leaving it to the proposed decree to resolve.

Aside from fighting the proposed consent decree in court, the General Assembly could pass a law canceling the executive order. Legislators left Raleigh on Tuesday and aren't scheduled to return for three months, however.

Cooper's agreement to "reset" HB2 led to strong criticism of Cooper by gay rights activists who worked for him and spent campaign money toward defeating Republican incumbent Pat McCrory, who signed HB2. The 2016 law required transgender people to use restrooms corresponding to the sex on their birth certificates in many public buildings. It also limited anti-discrimination protections for lesbian, gay, bisexual and transgender people.

It "may represent some narrow improvements for LGBTQ North Carolinians, by no means does it offer full protections or rectify the tremendous harm caused by the previous laws," Human Rights Campaign Senior Vice President JoDee Winterhof said.

Meanwhile, the conservative North Carolina Values Coalition issued a statement slamming the governor's moves as "a massive power grab, with sweeping changes that only the legislative branch has the authority to enact." Executive Director Tami Fitzgerald said the actions would make restrooms across the state less safe.

The amended complaint filed Friday in federal court says the replacement law continues the harms of its predecessor by leaving restroom policies in the hands of state lawmakers and preventing local governments or school systems from setting rules or offering guidance.

Charlotte will host the 2019 NBA All-Star Game. The NBA made the announcement Wednesday, effectively returning the event to the city less than two years after it pulled the 2017 All-Star Game in response to House Bill 2.

The 68th annual event will take place at Spectrum Center on Sunday, Feb. 17, 2019, preceded by a weekend of games and other activities.

Chris Sgro, the leader of the state LGBT rights group Equality NC, has announced he's stepping down at the end of May after nearly four years with the group.  He's taking a job with the national gay rights group Human Rights Campaign.  He'll be their communications director.  Sgro spoke with BPR about his time with ENC and about the bill that partly repealed HB2.

HB2 In Rearview, Credit Suisse Will Bring 1,200 Jobs To RTP