Three confederate monuments on the state capitol grounds will stay up for now.

The N.C. Historical Commission heard a petition to move the statues away from downtown Raleigh, but delayed action. Instead, it created a separate group to study whether the state should move the three Confederate memorials from the grounds of the old capitol to the Bentonville Battlefield about 50 miles away from downtown Raleigh in Johnston County.

Commission member Valerie Johnson said that delaying action was the right call. She wants to be thoughtful when making state policy.

"The postponement isn't to put it off indefinitely, but that we are exercising, as a commission, our ability to weigh in on matters of extreme importance in this state. And that we're doing so in a thoughtful manner and a reflective manner," she said during an impassioned moment after the vote to postpone action passed. "That we are going to hold ourselves to truth, and that truth must be told, and that the language that we're going to use is going to be language for generations going forward. That we respect history, but it's not static. And we need to recognize that it's not static, and make it something living for all North Carolinians."

Commission member David Dennard, an East Carolina University professor, was the only one to vote against the decision to postpone. "The delay will only postpone the discussion that we should have. And will prevent us from moving forward in the manner that we should move forward," he said. "Postponing it, I think will probably add more politics to the mix."

There are 14 monuments at the old capitol building, also called Union Square. These monuments honor soldiers in the Vietnam War, World War II, and others. The monuments related to the Civil War include the 1895 Confederate Monument, which stares westward down Hillsborough Street, the Henry Lawson Wyatt Monument, and the North Carolina Women of the Confederacy Monument. 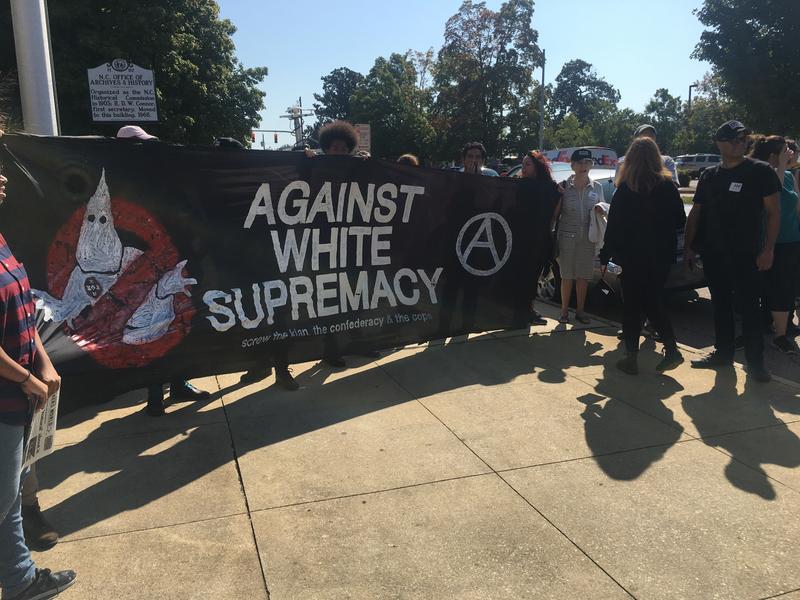 A group of about two dozen protesters stood outside the commission meeting on Jones Street and called for the removal of the statues. A smaller group sat in on the meeting and at times made their opinions known, though did not disrupt the meeting. State staffers agreed that the commission, tucked away in a corner of state government, had never seen this much interest in one of its meetings.

"This kind of decision that we are being asked to make, is a precedent setting decision," said commission member Mary Lynn Bryan. "We're really not used to, as a body, having issues that are this deep and this problematic coming before us in such a short period of time, without having an opportunity to look carefully at the ramifications of what we're doing."

While the petition to relocate monuments concerns only the three specific to the Civil War, there are others that memorialize people with checkered histories as well. Charles Aycock, for example, advocated for public education in North Carolina. However, he came from a slave-owning family and rode white-supremacy campaigns to power, according to a biography from East Carolina University. " Agitation of the race issue unleashed so much hate in 1898 that Aycock became alarmed about its excesses, yet he and his party employed the strategy aggressively in 1900," according to the biography. " To guarantee Democratic supremacy, the (North Carolina) legislature had devised a constitutional amendment, modeled after amendments in Louisiana, Mississippi, and South Carolina, which contained a grandfather clause and literacy requirements that disfranchised illiterate blacks while allowing illiterate whites who voted in 1867 (or whose lineal ancestors had voted in 1867) to register and vote until 1908."

Confederate Monuments Are All Throughout WNC

North Carolina is home to around 100 monuments to the Confederacy.  Governor Roy Cooper says all should come down in the wake of the death of a woman who was counter protesting a white supremacist march in Charlottesville, Virginia.  But a 2-year-old state law prohibits local governments from removing the monuments without state approval, keeping many of them in place for t

Several thousand people marched in downtown Durham in a demonstration against racism on Friday afternoon.

Asheville police arrested four people Friday morning for attempting to vandalize a Confederate marker in Pack Square downtown.  Police say protestors gathered around the Vance Monument before 8 a.m. Friday.  Several then attempted to damage the smaller marker in front of the monument that has a plaque with the likeness of Confederate General Robert E. Lee.  Arrested were 27-year-old Nicole Townsend, 45-year-old Amy Cantrell, 30-year-old Hillary Brown, and 34-year-old Adrienne Sigmon.  All are from Asheville and all four face charges of Damage to Real Property.