Choosing To Stay 20 Feet From Stardom 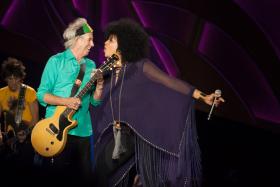 Lisa Fischer is one of the most in-demand vocalists in the music industry, but she rarely takes center stage.

She has made a career singing backup vocals for artists from Mick Jagger and Luther Vandross to Dolly Parton and the Nine Inch Nails. In 1992, she won a Grammy for the single, “How Can I Ease the Pain” from her debut album “So Intense.” She prefers to harmonize and play the supporting role instead of a solo career.

Lisa was one of the artists featured in the 2014 Oscar-winning documentary 20 Feet From Stardom, and she will be performing before a screening of the film at the North Carolina Museum of Art on Saturday, July 26. Host Frank Stasio talks with Fischer about her career and why she stays away from the limelight.