It’s a big year for Cheerwine, the cherry-flavored soda with a cult-like following that has been run by the same family for 100 years.

“I am a part of the fifth generation, we have some fourth generation members who work for the family,” said Joy Harper, Cheerwine’s marketing director and great, great, granddaughter of the company's founder, L.D. Peeler. “We’re excited to be celebrating our 100th anniversary.”

Harper was born and raised in Salisbury, just like Cheerwine. There was even Cheerwine at her wedding.

“Cheerwine was always in my family’s house growing up, no other soft drink was allowed,” Harper said.

Despite major competition from other southern beverage powerhouses like Coca Cola and Pepsi, North Carolina’s Cheerwine is still going strong and expanding. In fact, the burgundy red cola drink celebrated a milestone anniversary last weekend in Salisbury, where the first Cheerwine soft drink was bottled.

And one thing the Cheerwine founding family is most proud of: they’re still using the same formula, poking fun at that fact in one of their latest commercials.

“Cheerwine labs is hard at work on a very special project,” joked the commercial. “We’re changing our formula. No! How Dare you! Whoa people, we’d never mess with perfection.” 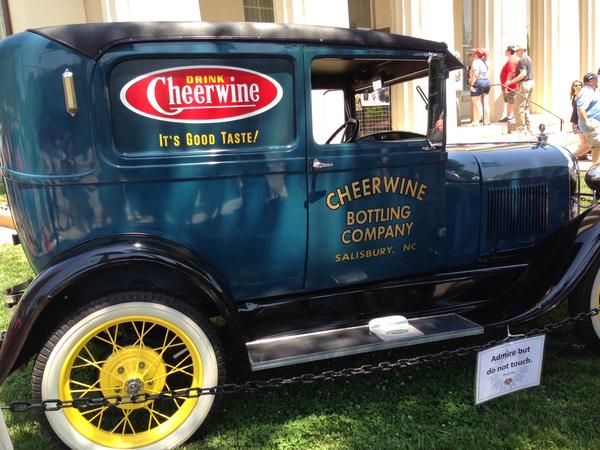 Cheerwine was actually forced to perfect its special blend. The company was distributing another drink called Mint Cola four years before Cheerwine was discovered. But it went out of business. In 1917, during World War I, there was a sugar shortage. After experimenting with different flavors, the company settled on a wild cherry flavor to help sweeten their drink.

For real Cheerwine enthusiasts, all of that history is on display at the Rowan Museum in Salisbury. Hundreds of items are part of the exhibit, according to the museum’s curator Evin Burleson.

There are Cheerwine posters, pictures, like the one of President George H.W. Bush taking a drink, and original Cheerwine bottles.

“And we also have, as far as we know the only one in existence, a Cheerwine bottle with the original paper label one it, the diamond paper label,” Burleson said. “And it’s a very rare piece.” 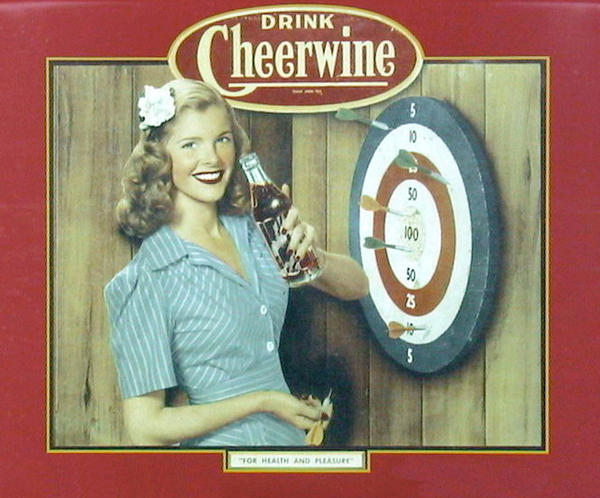 A celebration of Cheerwine

At the Cheerwine anniversary celebration, the line was long as people waited to walk through the museum. Among the enthusiasts was Lincoln Everard, who drove more than two hours to make it to Cheerwine’s 100th birthday party.

“I just like Cheerwine a lot,” he said. “I cut back recently, I haven’t had any in a couple of months.  They got free Cheerwine apparently here.”

Everard said he likes the newest flavor of Cheerwine the best, Cheerwine Kreme.  Yes, it’s a blend of Cheerwine with Krispy Kreme Original Glaze doughnut flavoring. It’ll be back again this summer.

Also at the celebration were Gayla Long and her two sons, who grabbed another relatively new flavor, Cheerwine Squeeze.

“It’s pretty good! It’s got a lemony taste to it,” Long said.

Long describes herself as a Cheerwine connoisseur.

“I remember drinking Cheerwine when I was 5 or 6 years old with my mom,” she said. “We would walk into town and go out to eat and I would always get a Cheerwine, all my life practically.”

Cheerwine knows it wouldn’t exist without its die-hard fans. Still the brand and the cheer is expanding. Today you can find Cheerwine in grocery stores across the southeast, and across the country in specialty stores like Cracker Barrel and World Market.