The president called the attacks terrorism and said they have no place in politics. But the president then blamed the news media for the discord and said it tried to blame him and the Republican Party for the attacks.

At first, the president was somber.

“Political violence must never happen in America, and I will do everything I can in my power to stop it," Trump said. "In recent days we have had a broader conversation about the tone and civility of our national dialogue…everyone will benefit if we can the politics of personal destruction.”

But then the president pivoted.

“The media’s constant unfair coverage, deep hostility and negative attacks, only serve to drove people apart and undermine healthy debate," he said. "For example, we have seen the media in recent hours to use the sinister actions of one individual to score political points against me and the Republican Party. Yet when a Bernie Sanders supporter tried to murder congressional Republicans and tried to murder a great man, we did not use that heinous attempt for political gain, because that would have been wrong.” 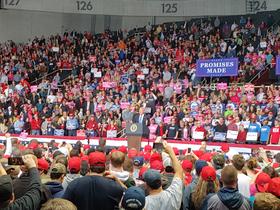 And for the next 40 minutes, the president returned to attacking his favorite targets –  some of whom were sent bombs in the mail, like Democratic Congresswomen Maxine Waters.

The near-capacity crowd at Bojangles’ Coliseum loved it. The Trump supporters broke out their favorite chants, like “Build the Wall,” “Drain the Swamp” and “Lock Her Up!,” about Trump’s 2016 opponent Hillary Clinton, another intendent target of a mail bomb.

The president then joked that news media would be reporting on their chant.

The rally’s main focus was to help Republican Congressional candidates Ted Budd in the 13th District and Mark Harris in the 9th District. Those two races are considered the closest Congressional races in the state, and are part of the Democrats plans to win control of the House of Representatives.

Harris is trying to beat Democrat Dan McCready to win the 9th, which stretches from Charlotte to Fayetteville.

“He told us that we going to appoint to the United States Supreme Court originalists who understood their job was to interpret the law and not make law because that’s the job of Congress," Harris said.

The North Carolina Democratic Party issued a statement Friday night saying the president’s lies, rhetoric and attacks have consequences. The party criticized Trump for trying to “stoke division and fear.”

For much of the night, the bombing attempts were the only difference from two years ago, when Trump held MAGA rallies throughout his election bid. After his hour-long speech, the president left the stage to the Rolling Stones song, “You can’t always get what you want,” just as he did two years ago.