A Look At The Final Budget And How It Compares To House, Senate Proposals 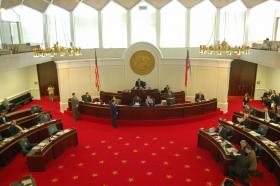 The plan grows government spending by 3 percent. It includes a $530 million dollar tax cut, an average 3.3 percent raise for teachers, and allocates more than a quarter billion dollars for the state reserves.

Republicans say it continues an effort to reduce taxes and invest in education.

Senate leader Phil Berger believes it’s a better approach than when Democrats were in charge.

"We think we’ve done it in a way that we’ll be able to sustain keeping North Carolina in that range as opposed to having a situation where we celebrate one day, because we say we’ve hit the average and then three years later we’re at the bottom again."

"We ought to all go out and have some fun because there is enough pork in it to make barbecue last a long time," he said.

In addition to pet projects, this budget provides money for the film industry and commercial airports, and cuts funding for the Governor and Attorney General – both Democrats. Lawmakers are expected to send this budget to Roy Cooper tomorrow. He has signaled he will veto it.

Here's how the compromise budget compares to what was proposed earlier this spring:

Other items in the compromise bill:

This week in state politics, a look at the budget.

Jeff Tiberii talks with Becki Gray of the John Locke Foundation and Rob Schofield of the N.C. Justice Center on the $22.9 billion spending plan passed by the North Carolina Senate.

The $22.9 billion dollar plan would spend more than $500 million less than a plan offered by Democratic Governor Roy Cooper.