Half a century ago, the federal Fair Housing Act banned racial discrimination in lending. But today, African Americans and Latinos continue to be routinely denied conventional mortgage loans at rates sometimes far higher than their white neighbors.

Disparities were exceptionally pronounced in 61 cities across the nation, including three in North Carolina. That was true even when controlling for applicants' income, loan amount and neighborhood. The findings come after a year-long study of millions of Home Mortgage Disclosure Act records analyzed by WUNC, The Center for Investigative Reporting's Reveal Show, and the Associated Press.

Related: "Keep Out" Investigation from Reveal, of the Center for Investigative Reporting

In North Carolina, the cities of Greensboro-High Point, Greenville and Rocky Mount had the widest racial disparities. But disparities existed in nearly every city both large and small in the state. The findings highlight these cities because they stand out for both the size of the racial gap as well as places with a statistically significant number of loan applications. 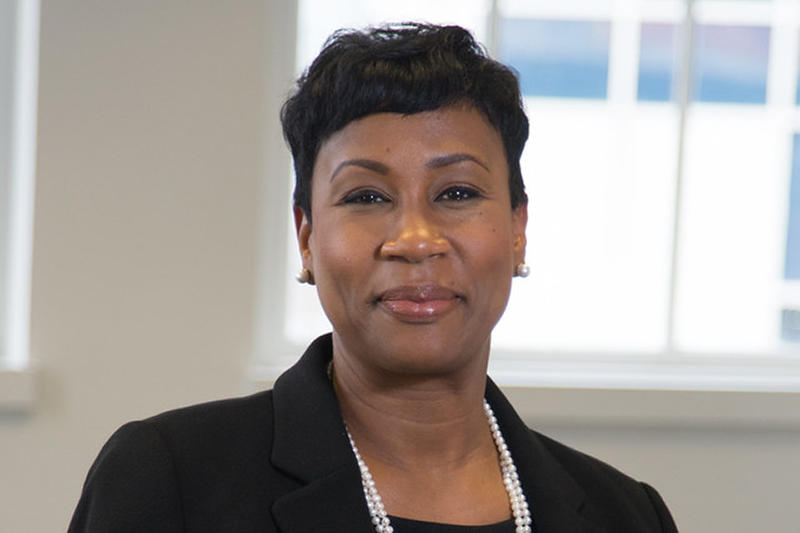 "We know as a nation that homeownership is really important and it's the way that most of us have built our wealth over time," said Nikitra Bailey, an executive vice president with the Center for Responsible lending who oversees the group's coalition building and constituent relations. "When you're not inside the marketplace because of these challenges, then you don't get that opportunity, so you remain on unequal footing. So this racial wealth gap grows over time as opposed to shrinking over time."

Statewide, minorities were about twice as likely as whites to see a loan application denied. Minorities also made up only about one-quarter of the total application pool.

Analyzing loan denial rates from a geographical perspective shows that individuals from rural areas are more likely to see their loan applications denied than those from urban areas. This matches many other economic data points which highlight North Carolina's yawning economic divide between rural and urban counties. The divide for home loans is exacerbated as property values decline, instead of rise, in these rural areas. 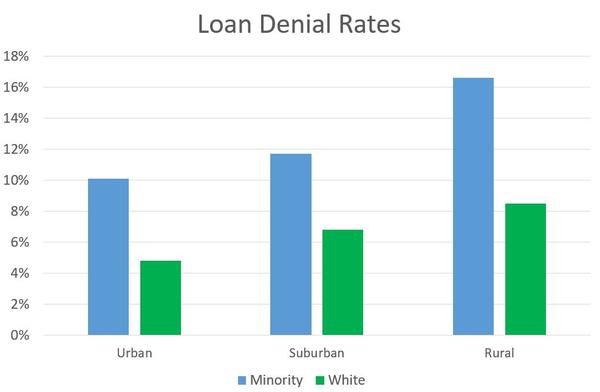 A History Of Discrimination

In the 1930s, surveyors with the federal Home Owners' Loan Corporation drew lines on maps and colored some neighborhoods red, deeming them "hazardous" for bank lending because of the presence of African-Americans or European immigrants, especially Jews.

Redlining has been outlawed for half a century. And for the last 40 years, banks have had a legal obligation under the Community Reinvestment Act to solicit clients - borrowers and depositors - from all segments of their communities.

But in many places, the law hasn't made much difference.

"It's not acceptable from the standpoint of what we want as a nation: to make sure that everyone shares in economic prosperity," said Thomas Curry, who served as the comptroller of the currency, a top bank regulator in the United States,  from 2012 until he stepped down in May.

Yet Curry's agency was part of the problem, deeming 99 percent of banks satisfactory or outstanding based on inspections administered under the Community Reinvestment Act. And the Justice Department sued just nine financial institutions for failing to lend to people of color under the Obama administration

Curry argued that the law shares part of the blame; it needs to be updated and strengthened.

"The Community Reinvestment Act has aged a lot in 40 years," he said.

Since Curry departed nine months ago, the Trump administration has gone the other way, weakening the standards banks must meet to pass a Community Reinvestment Act exam. During President Donald Trump's first year in office, the Justice Department did not sue a single lender for racial discrimination.

The disproportionate denials and limited anti-discrimination enforcement help explain why the homeownership gap between whites and African Americans is now wider than it was during the Jim Crow era.

In the United States, "wealth and financial stability are inextricably linked to housing opportunity and homeownership," said Lisa Rice, executive vice president of the National Fair Housing Alliance, an advocacy group. "For a typical family, the largest share of their wealth emanates from homeownership and home equity."

The latest figures from the U.S. Census Bureau show the median net worth for an African-American family is now $9,000, compared with $132,000 for a white family. Latino families did not fare much better at $12,000.

Lenders and their trade organizations do not dispute the fact that they turn away people of color at rates far greater than whites. But they maintain that the disparity can be explained by two factors the industry has fought to keep hidden: the prospective borrowers' credit history and overall debt-to-income ratio. They singled out the three-digit credit score – which banks use to determine whether a borrower is likely to repay a loan – as especially important in lending decisions.

"While quite informative regarding the state of the lending market," the records analyzed by Reveal do "not include sufficient data to make a determination regarding fair lending," the Mortgage Bankers Association's chief economist, Mike Fratantoni, said in a statement.

The American Bankers Association said the lack of federal enforcement proves discrimination is not rampant, and individual lenders told Reveal that they had hired outside auditing firms, which found they treated loan applicants fairly regardless of race.

"We are committed to fair lending and continually review our compliance programs to ensure that all loan applicants are receiving fair treatment," Boston-based Santander Bank said in a statement.

New Jersey-based TD Bank, which denied a higher proportion of black and Latino applicants than any other major lender, said it "makes credit decisions based on each Customer's credit profile, not on factors such as race or ethnicity."

Reveal's analysis included all records publicly available under the Home Mortgage Disclosure Act, covering nearly every time an American tried to buy a home with a conventional mortgage in 2015 and 2016. It controlled for nine economic and social factors, including an applicant's income, the amount of the loan, the ratio of the size of the loan to the applicant's income and the type of lender, as well as the racial makeup and median income of the neighborhood where the person wanted to buy property.

Credit score was not included because that information is not publicly available. That's because lenders have deflected attempts to force them to report that data to the government, arguing it would not be useful in identifying discrimination.

In an April policy paper, the American Bankers Association said reporting credit scores would be expensive and "cloud any focus" the disclosure law has in identifying discrimination. America's largest bank, JPMorgan Chase & Co., has argued that the data should remain closed off even to academics, citing privacy concerns.

At the same time, studies have found proprietary credit score algorithms to have a discriminatory impact on borrowers of color.

The "decades-old credit scoring model" currently used "does not take into account consumer data on rent, utility, and cellphone bill payments," Republican Sen. Tim Scott of South Carolina wrote in August, when he unveiled a bill to require the federal government to vet credit standards used for residential mortgages. "This exclusion disproportionately hurts African-Americans, Latinos, and young people who are otherwise creditworthy."