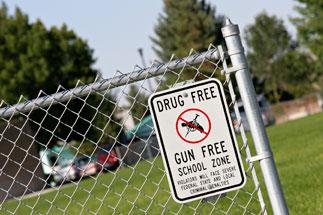 Some conservative Republican lawmakers are pushing House Bill 746, which would allow someone 18 years of age who can lawfully possess a gun to carry a concealed firearm without a permit.

"So right now, status quo, if you don't pass this bill, criminals have the advantage in our state," Millis said.

The proposal concerns Christy Clark of the advocacy group Moms Demand Action for Gun Sense in America. Clark told the House Judiciary Committee this week the bill would create a faulty honor system.

"Doing so will make it impossible to enforce, making it easy for people convicted of violent crimes and stalkers to carry hidden loaded guns in public, places where my family frequents every day,” Clark said.

Clark also expressed concern that the new law would lower the age of people qualified to lawfully carry concealed guns without a permit. Under current law, 21 is the minimum eligibility age for a carry conceal permit.

“This bill would also lower the age to carry a concealed handgun in public to 18, making North Carolina only the sixth state to let teenagers carry concealed, loaded handguns in public without a permit,” Clark argued.

Some people in law enforcement also have reservations about the legislation.

Eddie Caldwell is executive vice president and general counsel, and the chief lobbyist for the North Carolina Sheriffs’ Association. He says his organization would prefer that lawmakers leave the concealed carry permit in place.

“One of the public safety concerns is that when you are out in public yourself, or any citizen is, and someone is openly carrying a weapon, you can see that weapon, you can anticipate any action that the person might take with that weapon whereas if the weapon is concealed you don’t have that same sort of advance notice, which makes a handgun different than a long gun, a rifle or a shotgun,” Caldwell said.

For Caldwell and the sheriffs’ association, the bigger point about the proposed legislation is that it would not eliminate the need for a pistol purchase permit.

Caldwell said preserving the pistol purchase permit is something that distinguishes HB 746 from previous failed attempts to pass such legislation and could strengthen its prospects for passage.

The measure would also prohibit someone from carrying a handgun on private property where notice was properly and conspicuously given or posted.

The bill passed two committees this week and can now be taken up by the full house. Proponents say the legislation makes people safer by protecting their constitutional right to bear arms.

In recent years, efforts to pass similar legislation in North Carolina have failed.