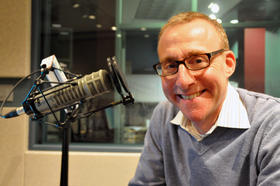 Rusty Jacobs is a politics reporter for WUNC. Rusty previously worked at WUNC as a reporter and substitute host from 2001 until 2007 and now returns after a nine-year absence during which he went to law school at Carolina and then worked as an Assistant District Attorney in Wake County.

As a reporter, he has covered a wide array of topics including military affairs, sports, government and damaging storms.

The state elections board is refusing to comply with federal subpoenas seeking confidential voter information.

The torn-down Silent Sam monument was the site of dueling protests Thursday night. About 50 members of a neo-Confederate group were greeted by several hundred counterprotesters on the campus of UNC Chapel Hill.

North Carolina joined California, Arizona, Nevada and Texas in seeing the greatest total increases in solar energy generation from 2008 to 2017, according to a report released Tuesday by Environment North Carolina Policy and Research Center.

This Week In NC Politics: Photo ID, A Cap On Personal Income Tax, And Fishing And Hunting

The legislature’s Republican majority pushed forward several proposed constitutional amendments they hope will boost voter turnout in their favor this fall. Among the potential ballot measures, a photo ID requirement for North Carolina voters, the preservation of fishing and hunting as a way of life and a cap on personal income tax.

Republicans touted the budget's increase in teacher pay, appropriation of $10 million to protect drinking water from emerging contaminants like GenX and a commitment of funds to improving prison safety.

The Republican-controlled General Assembly gave final approval to its 2018-19 budget today, passing an adjusted $24 billion spending plan through a process that allowed for no input or amendments from Democrats.

More than 400 local and state officials, business leaders and economic developers will gather in Raleigh Tuesday for the second annual Rural Day.

Organized by the non-profit North Carolina Rural Center, the event will focus on promoting economic development in the state's 80 counties with a population density of less than 250 people per square mile.

This week’s WUNCPolitics podcast is an extended version of our regular Week In State Politics segment that airs every Friday with Rob Schofield, executive director of the progressive N.C. Policy Watch, and Becki Gray, senior vice president of the conservative John Locke Foundation.

There was at least one big upset in North Carolina congressional primaries Tuesday: incumbent Robert Pittenger lost a close race to Republican Mark Harris, a challenger he beat by only 134 votes two years ago.

This Week In NC Politics: Confederate Monuments And The Upcoming Primary Election

Primaries are less than a week away and even though Democrats hope this year’s mid-term elections will be swept up in a blue wave, flipping GOP congressional districts in North Carolina will still be a tall order.

With President Donald Trump’s approval rating low, Democrats nationwide are hoping midterm elections will trigger a blue wave this year that will change the balance of power in Congress. Some political observers believe that wave could wash over some North Carolina districts, including the 2nd, where three Democrats are battling for the chance to replace incumbent Republican George Holding.

WUNCPolitics Podcast: A Conversation With Rob Schofield And Becki Gray

The two talk about the races for U.S. Congress in North Carolina that are most likely to be competitive in next month’s primary, and this fall’s general election.

On this week’s review of the week in North Carolina politics: high school students and legislators are on different tracks when it comes to school safety; California billionaire Tom Steyer announces he’ll put $1 million into efforts to flip North Carolina’s 9th District; and Lieutenant Governor Dan Forest says conservatives have faith in God, while liberals answer to no higher power than politics.

Tree Cutting Is Underway For The Atlantic Coast Pipeline, But Opposition In NC Is Staunch

Listen
Listening...
/
Rusty Jacobs reports on support and opposition for the Atlantic Coast Pipeline, of which 200 miles will cut through the Tar Heel State.

Crews are already cutting trees in Northampton and Robeson counties to make way for the Atlantic Coast Pipeline, the 600-mile-long delivery system that will carry natural gas from West Virginia, across Virginia, and through North Carolina. The pipeline will cut an eight-county, 200-mile-long path across the Tar Heel State with supporters and opponents all along the route.

State regulators are testing fish from a privately-owned lake near the Chemours plant in Bladen County for the presence of GenX, the latest regulatory response to increasing questions about the risks posed by this emerging contaminant.

Ted Davis knows any legislation needs to get through a sharply divided General Assembly.

The Wilmington Republican who chairs the Select Committee on North Carolina River Quality has said more controversial issues like funding for the Department of Environmental Quality can come later.

A senate committee looking at judicial redistricting and reform will meet Wednesday in Raleigh, a few weeks after Democrats walked out of a previous meeting.

The Republican chairs had refused to allow a retired superior court judge invited by Democrats to address the committee.

Friday is the deadline for submitting suggestions to the Stanford University law professor tasked with re-drafting North Carolina's legislative maps.

A federal judicial panel appointed the so-called special master to fix flaws in the maps submitted by Republican lawmakers.

NC Cities Among Many Vying For Amazon HQ2 Facility

Proposed Pipeline Gets Support From Some Local NC Leaders

A controversial pipeline project is getting some support from local elected leaders in the eastern part of the state.

Listen
Listening...
/
WUNC's Rusty Jacobs reports on a bill that would make it easier for third-party candidates to participate in elections in North Carolina.

It has been an intensely divisive time in the North Carolina General Assembly—with disagreements on the budget, LGBT rights, and private nuisance lawsuits against hog farms to name a few. Yet there seems to be near unanimity in the legislature on at least one issue: ballot access.

Local Governments Could Get New Way To Raise Revenue

Legislation in the state House could give local governments a new way of raising funds.

The $22.9 billion dollar plan would spend more than $500 million less than a plan offered by Democratic Governor Roy Cooper.

The Week Ahead: State Budget Talks

The new fiscal year begins July 1, and lawmakers could get a two-year budget plan in place by then if all goes as scheduled.

The chief justice of North Carolina's top court threw his support behind legislation to raise the age of juvenile offenders.

North Carolina is now the only state to automatically try 16- and 17-year-olds as adults in criminal court. But Supreme Court Justice Mark Martin says it's time for that to change.

"Our own Department of Public Safety conducted surveys on this issue which reflected that over 90 percent of parents already thought that 18 was the age for adult jurisdiction," Martin said.

During a press conference to rally support for the bill, Martin highlighted that North Carolina is the only state that has not upped the age limit to try defendants as adults. He said that teenage mistakes can follow North Carolinians into their adulthood as they seek employment. In other states, an error in judgment made by a 17-year-old would have a smaller impact on his ability to find employment later in life.

A statewide non-profit and 10 North Carolina citizens are suing the Republican-led Legislature over a special session held last year to pass laws that eroded the governor's power.